The game follows the adventures of Mag Launcher and his friends as they explore the ruins on the Northrop continent. Three years ago, Mag's father, Asroc Launcher, disappeared together with Mag's mother in the ruins near Pannam Town while searching for Evolutia, the ultimate Cyframe of legend. Suddenly, the mysterious girl, Linear Cannon showed up at the door of the Launcher family mansion with a note from Asroc. The note instructed Mag to protect and care for her at all costs.

Three years later Mag is now 16 and old enough to begin exploring the ruins. The game opens with Mag and Linear exploring in some ruins.

After being ambushed by monsters, they fight them off and proceed into the deepest part of the ruins. They come to a dead end, and even though he believes it could be a trap, Mag continues to walk towards the wall. He steps on a switch on the floor which activates a chain of lights that then fires at the wall. This causes the wall to begin to collapse and as Mag, runs away, he notices that Linear is not with him and returns to drag her away from the danger. Recovering nearby, Mag scolds Linear for not fleeing when her life was clearly in danger. Linear gets distracted by something and walks towards the area where the wall collapsed. In its place is a new wall covered in a mural of the Messenger of Light. Recognizing the holy symbol, Mag states that the ruin's relic must be in the area on top of the mural. However he is interrupted by Chain Gun, his rival and fellow adventurer, whom used her Cyframe's jetpack to fly ontop of the area during the ruckus. With the treasure in hand, she denounces Mag as an amateur and scolds him for being so ill-equipped and bringing Linear with him. The two begin to argue and afterwards Chain exits the ruins, leaving Mag to return to town empty handed.

Back in town at the Society office, Mag reports in to inform Nina of his mission's failure and heads home with Linear. Back home he is promptly scolded and lectured by his butler, Gre Nade, over his laid-back attitude, failure to live up to his father's legacy and for not doing enough to pay off the family debt. Gre orders Mag to return to the Society building to sign up for a new mission, one that he will actually treat seriously.

The battle system is a traditional turn based system. Up to three party members can be used in battle or Mag can go solo. The turn order is depicting in icons on the right-hand side of the screen. Enemies are represented by purple faces and party members by their respective character portraits.

Player characters have a 3x3 space to move in. Each character is bound to their respective column, but can move or be moved between the rows in battle. The characters positions effect how long they have to wait for their next turn, damage dealt and damage taken.

With the exception of a few FMV's (full motion video), all of the game's graphics are generated in real-time by the Dreamcast. The graphical style is inconsistent as a lot more work went into certain parts of the game (enemy character models, location interiors) than others (most of the human character models). However this is normal for an early Dreamcast game (the first 128-bit system), as the developers were still learning how to use the hardware properly. At the time of the game's release in 1999 the graphics were revolutionary and far beyond anything that could be produced on the Sega Saturn. The character models facials' appear to have been hand drawn. The next game, Evolution 2: Far Off Promise would use much more polished character models.

Evolution breaks a number of cliches typical to JRPGs. The player's inventory is limited to 32 items and none of them can be stacked. Monsters do not drop money, only experience points, and the player has to make money by selling items found in the ruins to the shops in town.

The game had an inconsistent, and at times poor, English translation. The text is full of bad grammar, awkward wording and nonsensical sentences. There are also many cases of inconsistent spacing, punctuation and capitalization. Despite these issues, the game is mostly intelligible.

The sequel, Evolution 2: Far Off Promise, had a much cleaner translation with far fewer errors.

As of May 2018, the official website is, surprisingly, still active. 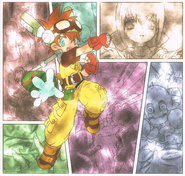 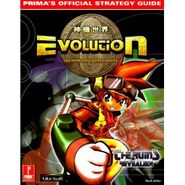 The party of "Evolution: The World of Sacred Device." 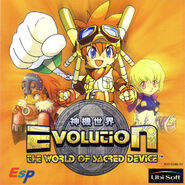 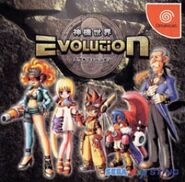 The battle system at an earlier point in development.
Add a photo to this gallery
Retrieved from "https://evolutionworlds.fandom.com/wiki/Evolution:_The_World_of_Sacred_Device?oldid=5052"
Community content is available under CC-BY-SA unless otherwise noted.